Well Begun is Half Done (Otherwise Entitled, How to Throw a Mary Poppins-Themed Birthday Party from Scratch)

Even I think I'm an idiot. After the maelstrom that was Ladybug's first birthday party (30+ adults crammed into our little cape cod along with two dogs, ten children, and one bathroom), I declared, to my husband's euphoric relief, that next year would just be a small, simple family gathering. Dare to dream, Daddy. Dare to dream.

It's really his own fault that he fell for that. I mean, does he even KNOW ME? Even a small family gathering (which still totaled twelve adults, three kids, and yes, the two dogs, by the way) has to have a theme, decorations, homemade appetizers, etc. At least, it does when it's to celebrate my precious little pumpkin's 2nd birthday!!! As I mentioned in a previous post, my daughter's recent obsession has been Mary Poppins, and there are FAR worse choices in my book! Julie Andrews = Perfection. This is not up for debate. So, just in case I lost you along the way, my brilliant plan was to throw a Mary Poppins-themed  Oh, the fun I shall have!

Pop quiz: How many MP-themed party decorations do you think they have at the party store? Any party store? Answer: NADA! Well, no matter. I have Pinterest at my disposal, which means I can do anything, right? And as Mary Poppins would say, "There's time. There's time. Spit-spot!" And off I went to figure out how to put this party together from scratch. There was one fleeting moment where it occurred to me that picking a different theme would be a much simpler solution, but who likes to make things easier on themselves ("Bert, what utter nonsense! Why do you always complicate things that are really quite simple?")? Work hard, not smart, I always say! Besides, in my excitement, I'd already told my mom, my in-laws, my best friend, the pediatrician, and the clerk at Michael's about the fabulous Poppins party I was throwing. I was committed (and not in the way my hubby suggests I should be....committed).

Pinterest offered very little along the lines of Mary Poppins DIY, I'm sad to say. I did find these adorable penguin cookies here, but I had trouble opening the site, so I just used the picture as a guide. Mine didn't turn out quite as nicely, but they got the point across. 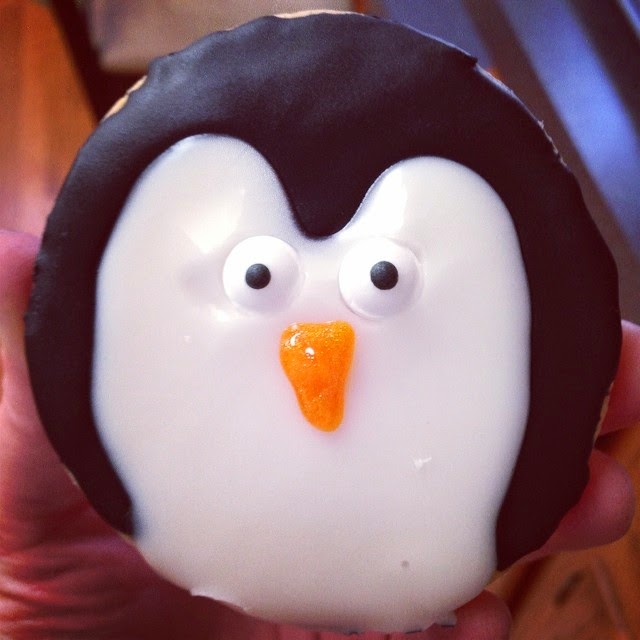 Also a good guide if you're making Elvis cookies (as my sister kindly pointed out). Warning: the black food coloring will turn your teeth and tongue black. Just another reason to be anti-food coloring, but unfortunately, time was a factor. Also, even if I had the time, I have no clue how I would have made black food coloring naturally. If you have any suggestions, let me know. I really don't like using food dyes.

Kites are also a necessity at a Mary Poppins party. These were really easy. I found my inspiration here. For mine, I found foot-long craft sticks at Michael's and had my husband cut some of them down to 8 inches to work as the horizontal pieces. Then I glued them to the back of a piece of scrapbook paper in a cross shape and folded the paper in over them to form the diamond shape. I did the first one as a guide and my husband did the rest. Isn't he a good egg?: 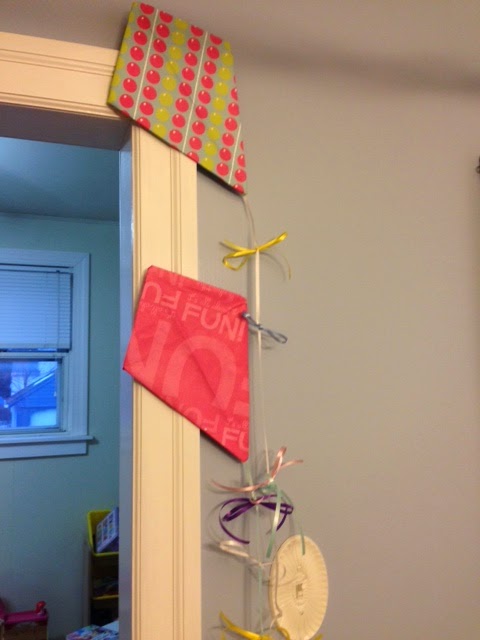 For the tails, I just bought a spool of pastel-colored gift ribbon and tied bows, cycling through the different colors. The ends I just curled with scissors. So simple, but they were really cute. I saved them to possibly use as decoration when I eventually redo Ladybug's bedroom.

As another simple decoration, I also cut bits of lace trim I had leftover from a tree skirt I'd made at Christmas and wrapped them around mason jars with batches of daisies. I thought they gave the party a nice touch of turn-of-the-century charm. Do you agree? 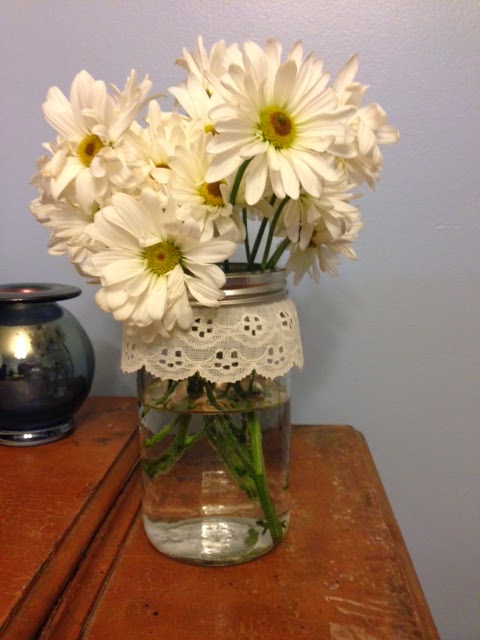 The cake was a little trickier. I scanned Pinterest and couldn't find anything that would really work (at least, not that I could do myself. There are some AMAZING cake artists out there, yo!)
I decided to do a sheet cake and add black fondant cutouts to give a nod to the Broadway version. Here's a pic of my inspiration: 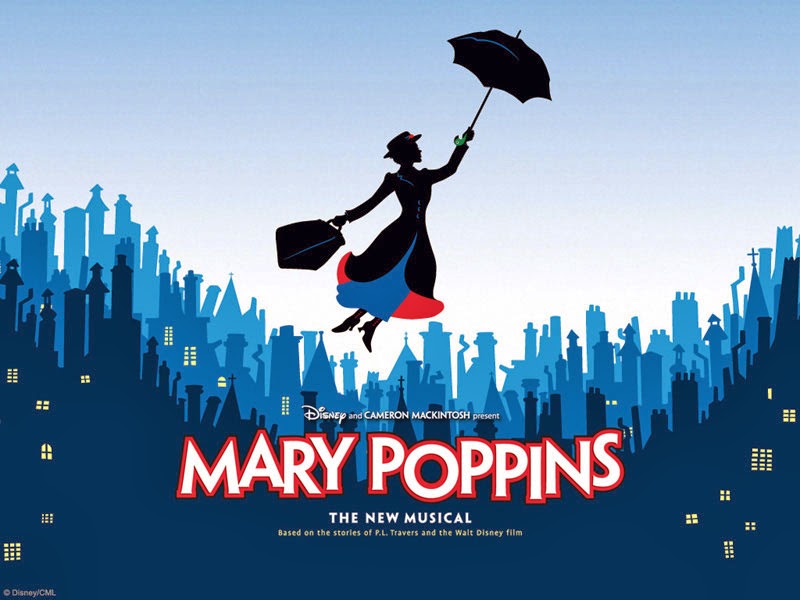 For the sheet cake, I used this wonderful recipe here and my own vanilla buttercream icing recipe (if you're nice, I may share in a later post. Don't get too excited, it's not fancy). I printed out a skyline silhouette and the outline of Mary Poppins from the Broadway pic and cut them out with an X-Acto knife to use as tracers. I picked up the black fondant at Michael's (my home-away-from-home, if you couldn't tell). Here's how it came out: 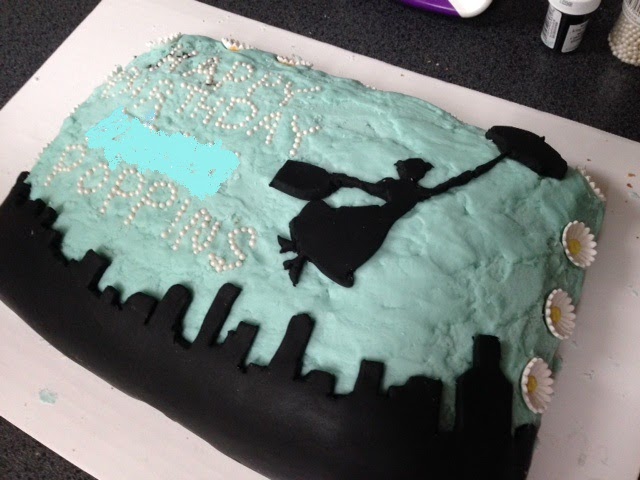 I found little candy daisies at Michael's that I used around the rim. I was going to add a blue rosette trim around the base, but unfortunately, I ran out of time. Actually, the cake was only half decorated and I still had appetizers to go into the oven when my guests arrived, so my sister did the lettering with the little candy balls. I should have invited Admiral Boom to the party to keep me on track! I also should have added an extra tablespoon of milk to the icing because as you can see, it didn't spread very neatly. Oh well, live and learn! I thought it turned out nicely overall, and it was delicious!

The creme-de-la-creme, however, the spoonful of sugar, if you will, was definitely my Mary Poppins hat. This was yet another area where Pinterest failed me and I had to improvise, but I was really happy with the results. 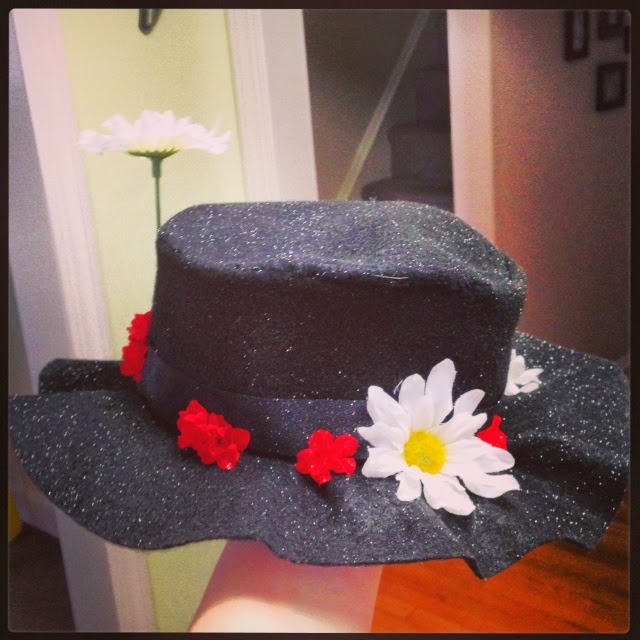 I will include the tutorial in my next post, but there you have it! Note: I did strive for authenticity, but the fake red berries were too pricey, so I subbed these little red flowers for a third of the price.

So overall, I pulled it off. My little ladybug had a great party and is still singing "Happy birthday to you" everywhere she goes. She has also been stacking her toothpaste on top of her spit cup and pretending to blow out the candles on her "burday cake." Fortunately, the cup has been empty (ahem) almost every time...
Posted by momtoaladybug at 6:22 PM No comments:

momtoaladybug
Hi! I am the lucky mommy of a too-clever toddler girl and two affectionate, dysfunctional doggies.